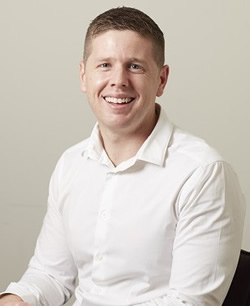 With severe allergies to peanut, pecan, cashew, walnut, pine nut, pistachio and sesame, Michael, now in his 30's, has been dealing with food allergies and anaphylaxis his whole life. Eating has always been a balance of being careful, but still enjoying and experiencing lots of different foods and he’s managed it very well. But Christmas brings additional challenges for people with severe food allergies.

A couple of years ago, Michael’s work Christmas party, at an Asian Fusion restaurant, was getting underway. Precautions had been taken.  The restaurant had been made aware of Michael’s allergies and the severity of his reactions. When he arrived, Michael also made sure to speak personally to the staff member serving his table who said she would advise which of the dishes would be safe for him.

But the very first dish of the night was placed by a different member of staff and Michael recalls her saying something vague along the lines of ‘this one is good for the vegetarians and allergies.’ Hungry, and having had a couple of beers, Michael dug straight into the green dip. Unfortunately, it turned out to be wasabi hummus.

With a potentially fatal allergy to sesame, among other foods, Michael would never normally eat hummus but, due to the wasabi, this one was green, so he assumed it was avocado. By the time the first staff member came back to warn Michael, it was too late.

Michael didn’t have his adrenaline autoinjector with him and he grabbed a taxi to the hospital rather than getting an ambulance, both of which were potentially deadly decisions.

Fortunately for Michael, this allergy nightmare ended well.  After two doses of adrenaline and a night in hospital, Michael recovered from this anaphylaxis. This was the worst reaction Michael has ever had and now he makes sure he has his adrenaline autoinjector with him always. He learned this lesson the hard way.

“It can happen so easily,” says Michael, “and that just means it’s all the more important for the research to continue to find better treatments so there are better outcomes for people with allergies.”

©2023 Allergy and Immunology Foundation of Australasia